The play’s the thing!

With Kentucky Shakespeare back at the PAC later this month, it bears repeating that Shakespeare wrote his plays as entertainment – to be performed, not read.  So this month’s blog (with a little help from Shakespeare for Dummies) is designed to help you get the most from their Friday, March 27 performance of Hamlet:

So read up before you go, study your program when you arrive and watch and listen intently and above all else, enjoy the show. It’ll all be well worth the minimal prep on your part.  After all, all’s well that ends well – unless your name is Hamlet. 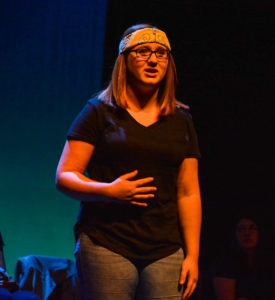 Alyssa in CHHS 2019 production of The Laramie Project.

This month the PAC Kid Spotlight recognizes Central Hardin High School’s Alyssa Vittitow, who will be performing in their production of Little Women at the PAC this month.  Learn more about Alyssa and our other PAC Kids.