When first published 1887 “A Study in Scarlet” and its protagonist, Sherlock Holmes, attracted remarkably little public interest.  So little in fact that the author, Doctor Arthur Conan Doyle continued as a poor physician writing short stories, essays and articles to pass the time between the few patients that visited him.

When published across the Atlantic a year later, this novel, however, caught the interest of at least one person, the wife of J. M. Stoddart, managing editor of the American publication, Lipincott’s Monthly Magazine.  She urged him to commission a sequel.  Like any smart man, he took his wife’s advice and arranged a business dinner at Westminster’s Langham Hotel with two prospective English fiction writers: Doctor Doyle and… Oscar Wilde.

The stuffy conservative retired military man, Doyle and the effete champion of aestheticism, Wilde got along surprisingly well.  As Doyle recalled in his autobiography, “Memories and Adventures,” Wilde put Doyle immediately at ease with his enthusiastic praise of Doyle’s little read and now largely forgotten historical adventure novel “Micah Clarke.” —

“It was indeed a golden evening for me.  [Wilde’s] conversation left an indelible impression upon my mind. He towered above us all, and yet had the art of seeming to be interested in all that we could say.  He took as well as gave, but what he gave was unique.  He had a curious precision of statement, a delicate flavor of humor, and a trick of small gestures to illustrate his meaning, which were peculiar to himself.”

By night’s end, both men agreed to each write a novel to be serialized in the magazine.  And although Wilde’s contribution “The Picture of Dorian Grey” bore little if any trace of the conversations that might have taken place across the table that night; Doyle’s detective novel has Wilde’s fingerprints all over it.  To fulfill his obligation to the periodical, Doyle would pen “The Sign of Four,” in which Holmes made his second more nuanced and decidedly more bohemian appearance as reflected in his attire, attitude and notably the use of recreational drugs.  In addition, one other character, Thaddeus Sholto, appears as a loving if unflinching parody of Wilde and the aesthetic movement as a whole.

Following it’s 1890 run in the Lippincott, “The Sign of Four” was published in novel form to a bit greater critical acclaim than the first Sherlock novel but only moderately better financial success.  Thus, Doyle was not able to “quit his day job” until a year later with the unabashedly successful publishing of his first short stories based upon the detective.

I hope you’ll join us at the PAC for a “golden evening” (or afternoon) this month to witness “The Novel Stage Adventures of Sherlock Holmes: The Sign of Four.”

PS – As some of you may know, “The Sign of Four” is the second of four Sherlock stage adaptations I’ve written.   Well, I’m thrilled to announce that the adaptation I wrote and directed last season — “The Novel Stage Adventures of Sherlock Holmes: A Study in Scarlet” — is now available for purchase through Barnes & Noble.   And as my way of giving back, 50% of all sales and royalties of this adaptation will benefit the PAC.  Pick up a signed copy at our “Sherlock Sneak Peek Bookfair” at Barnes & Noble on Saturday, January 18.  While there, see a few vignettes from “The Sign of Four” performed.  Additionally, the PAC will receive a percentage of ANY purchases made at the store or cafe if we are mentioned at the register.  If you can’t make it that day, you can still support the PAC by using the code 12577284 when you shop barnesandnoble.com from January 18 to January 25. 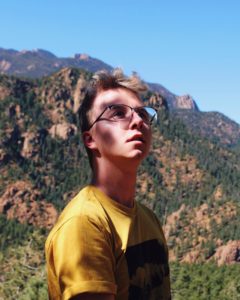 This month we have a special “Flashback” edition of the PAC Kid Spotlight as we revisit John Hardin High School student Jared Baird.  Jared was recognized as a PAC Kid back in January of 2016 when he was an eighth grader and now that he’s a senior and back working with us as a PAC Aide we thought’d be interesting to find out how being involved in the arts has made a difference in his life.   Learn more about Jared and our other PAC Kids.